Monday was an incredibly hot day. I think it must’ve been 40 degrees with the humidity. I woke up early and went to the Starbucks at 525 for a couple hours to work. I’ve been doing that lately to get myself back to a morning routine. Hopefully the right job will come along soon. I interviewed at Cota Inspires last week and the interview went pretty well – they will let me know next week if I got it. The job is an Executive Lead to lead a campaign to provide 20,000 homes for Toronto’s homeless by 2018. It is an exciting job that I would be honoured to be a part of.

I sat outside on the benches at SickKids and read the morning Metro. There was a study about sleep deprivation and how there are certain people who genuinely don’t need a lot of sleep – only a few hours will do. Sadhguru is always talking about how little sleep is required for those who are vibrantly alive and get their energy from life energy. There are yogis that can survive just off coconut water because their kundalini is activated. I’m definitely not one of those people – I love my beauty sleep! 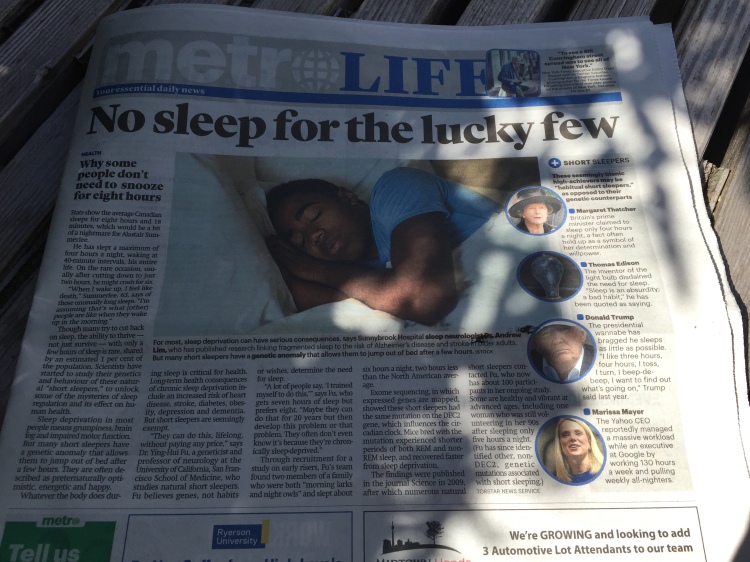 I walked through the MARS Centre and came across this white board filled with suggestions on who people would like to see come speak at MARS. I agree with a lot of them – Obama would be amazing! And Drake, Oprah, Mark Zuckerberg, and Elon Musk.

I started reading Veiled Threat: The Hidden Power of the Women in Afghanistan. As you can tell, I’m obsessed with Afghanistan. And Islam. And Women. Not to mention I love author and journalist Sally Armstrong. I saw her speak at a GenNext event at Spoke Club one time and she was so inspiring. She was one of the first journalists to report on the crisis that women were facing during the Bosnian genocide. She said that since then the media has come a long way in terms of giving attention to the atrocities women face, especially during times of war. She thinks that Facebook is instrumental in gathering forces and providing a platform so that everyone has a voice. The book profiles extraordinary women, like Dr. Sima Samar, who is a doctor, activist and a natural storyteller.

“Let me tell you a story,” she began. “A sixteen year old came with her parents to my clinic. She was six months pregnant and terrified. She had been raped. The law, according to the extremists, is that a woman who is raped must have four male witnesses to prove that she didn’t cause the rape. Naturally, no such witnesses are ever available. Without them, the family is obliged to kill the girl to protect the family honour.”

I made it to Balzac’s where I did some work, and then went to the ROM to get a refund for some tickets I bought for Friday Night Live and didn’t end up going to. I asked to use the bathroom (which they normally don’t let you do because it’s inside the museum) but they let me so I took advantage of it and saw the exhibits for free. There is something so calming about being in the presence of a Buddha statue.

Then I met up with Marissa from my Toastmasters club so that she could help me with my interview preparation. She is the director at AIS (Accomodation, Information, and Support) and is very knowledgeable about homelessness and supportive housing. We met at the Toronto Western hospital. She quizzed me on a few things like what my first steps would be in implementing changes described in the consultants report, and why I was good for the role.

On the way home I stopped by the jazz festival and caught the rehearsal of a jazz ensemble that was performing later that evening. So talented!!

I'm a blogger from Toronto, Ontario who loves creative writing, dancing, singing, and reading. I write about a range of topics, from Hinduism to feminism to travel to poetry. I live life as an adventure and I'm an optimist at heart. One of my favourite things to do is sit down with a cup of tea and read the thoughtful and inspiring blogs that I discover!